The United States today is a large net importer of crude oil and refined products. And, yet the story that the country can somehow export crude oil as a foreign policy measure to help reduce Ukraine's dependence on Russia won't die. Oil executives and their surrogates keep bringing it up, and unsuspecting reporters amplify a message that has absolutely no basis.

The reason for this oil industry public relations blitz on the Ukraine is rooted in the industry's desire to end a decades-old ban on U.S. crude oil exports--one which the industry hopes to persuade Congress and President Obama to overturn. There is, in fact, a case regarding market efficiency for overturning the ban, but this is NOT the one the industry is using in its public relations campaign.

Here's why: The major effect of lifting the ban would be to allow domestic producers to sell lighter grades of crude oil--which U.S. refineries have little remaining capacity to refine--to foreign refineries which do have spare capacity. Perversely, that would lead to GREATER imports of foreign oil--mostly heavier grades--more suitable for the current U.S. refinery infrastructure. Net imports would remain unchanged, of course, even as the country's oil supply becomes more vulnerable to events abroad.

But the new arrangement would allow domestic producers to receive a higher price--the world price--for their lighter crude which comes increasingly from wells in deep shale deposits such as the Bakken in North Dakota. This oil has been selling at a discount to world prices since there is more of it in the United States than domestic refiners can currently handle. The oil market would become more efficient, but at some cost to energy security.

You don't have to take my word for any of this. Here's what Ken Cohen, Exxon’s vice president of public and government affairs, told The Wall Street Journal:

Exxon has long supported free-trade policies, and argued that the same rules of trade should apply to oil and natural gas as to any other product made in the U.S.A. Beyond the ideology, too much crude from Texas and North Dakota has been pushing down oil prices in the U.S. Exxon, as the nation’s largest energy producer, wouldn’t mind getting higher prices for its crude.


How do I know that this change in policy would lead to greater imports of foreign oil? Cohen again confirms this:

But when it comes to oil, refiners are particular about the flavor of crude they use. The rise in fracking has unleashed a large volume of light, sweet crude oil – while American refineries along the Gulf Coast are generally set up to handle heavier crudes from Mexico and Venezuela. So there’s a mismatch. U.S. oil producers want the option of exporting some high-value light oil, leaving refiners to import lower-cost heavy oil.


At least in this interview Cohen is being straight about the real reasons the industry wants the export ban lifted. And he has a point when he says that U.S.-based companies--with the exception of oil companies--are generally free to sell their products and services to the highest bidder worldwide. Whether his complaint carries weight depends on whether you believe energy is just another commodity or one that has a special role in the economy. That special role can be simply stated as follows: Nothing gets done without energy and so energy is, in fact, a unique commodity that deserves special treatment.

Now, you can imagine that the above argument is not one that will move Congress or the president to act. So, the industry--which can now say that it has already acknowledged its real argument--is making another argument, albeit a specious one, that we can somehow exert influence on the Ukrainian crisis in a way that will undermine Russia if only the United States would allow oil exports.

I tried to put this nonsense to rest in a previous piece citing America's continuing dependence on imports which remain close to 50 percent of our true petroleum consumption. But, let me try another simpler, visual way to show how ridiculous this argument is. Jim Hansen of Ravenna Capital Management pointed to the following graph available on the website of the U.S. Energy Information Administration. It's a graph of U.S. imports of crude oil and petroleum products from Russia. 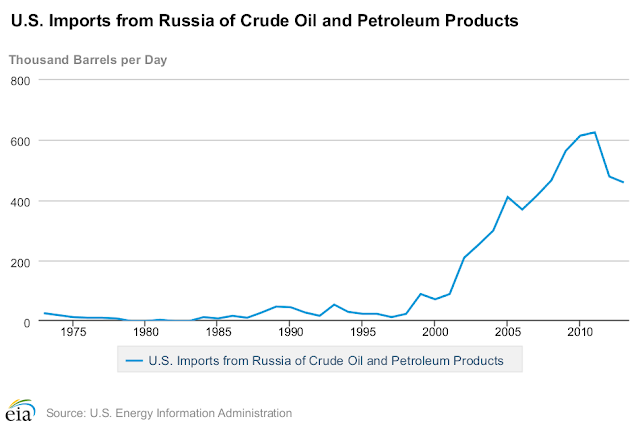 U.S. imports from Russia remain above 400,000 barrels per day. Is it the plan of those who advocate U.S. oil exports to the Urkaine to import more oil from Russia so we can export it to the Ukraine? How exactly would this weaken Russia? Or change the world oil supply situation?

It really has gotten that absurd.