Charles Mackay was a 19th century Scottish poet, journalist and author who is best known these days for his book Extraordinary Popular Delusions and the Madness of Crowds. He leads off with three of the most famous financial bubbles in history: the Mississippi Scheme, the South-Sea Bubble and Tulipomania. He also writes of fortune-telling, witches and the Crusades.

Fortune-telling remains a mainstay among the financial elite and the lowliest retail investor on the planet alike. The U.S. Federal Reserve Bank has a sort of running fortune-telling tool called GDPNow that takes up-to-date indicators and plugs them into its formula for projecting the current direction of U.S. GDP. GDPNow is revised every few days as new values for its many components become available.

The latest reading as of May 29 is minus 51.2 percent. That's an annualized number that is seasonally adjusted. It's a number that suggests that economic activity may have fallen at least as much since January as it did in the first four years of the Great Depression (1929 to 1933). At the bottom of the depression in 1933 the U.S. economy had contracted by about 30 percent. Unemployment in the United States reached 25 percent. The Dow Jones Industrial average had lost almost 90 percent of its value.

We who have been suggesting that a peak in world oil production was nigh almost from the beginning of this century looked like we might be right when oil prices reached their all-time high in 2008. But since then, we have taken it on the chin for more than a decade as the U.S. shale oil boom kept adding to world supplies—even as production in the rest of the world mostly stagnated or declined.

But then world oil production turned down—not when the recent coronavirus pandemic and associated economic shutdowns hit—but more than a year before while few people were noticing. Monthly fluctuations will make it difficult to pinpoint a peak until long after it occurs. But, let's note the difference between world output in November 2018 which was 84.5 million barrels per day (mbpd) versus December 2019 which was 83.2 mbpd when the world economy was supposedly still in high gear. (These numbers are for crude plus lease condensate which is the definition of oil on major oil exchanges.) Between these two dates monthly oil production was occasionally lower than December 2019, but never higher than November 2018.

Does this mean oil production has reached an all-time peak?

The world in straight lines: Why we are not ready for discontinuities

It is not unusual to hear someone make definitive statements about the distant future as if they were facts. How often have we heard something like the following: The world economy will double in size by 2050.

When people represent such "facts" in chart form, those facts become somehow more convincing. (You need to click on the charts below to see them clearly): 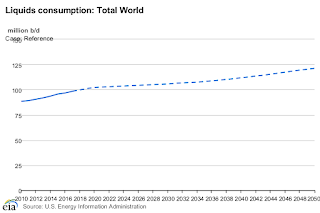 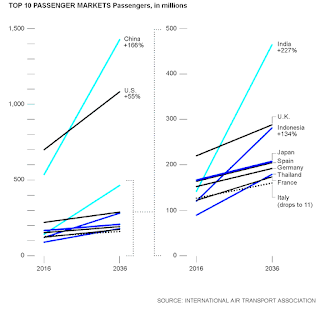 I'm taking a short break this week and expect to post again on Sunday, May 17.
Posted by Kurt Cobb at 9:52 AM No comments:

Petroleum geologist and consultant Art Berman recently detailed the problem in this piece. Berman is the man who accurately predicted—starting way back in 2008—the persistent losses that shale oil and gas would produce for the companies that extracted them. The shale industry continuously vilified Berman for his analysis over the next decade, even as the industry was in the process of blowing 80 percent of investors' capital as of last year. With the arrival of the coronavirus, the coup de grâce has just been delivered to a shale oil and gas industry that was already on its knees.

Perhaps the most important thing to understand about the current oil "glut" is that it is not merely the result of producing too much oil for an economy humming on all cylinders. It is primarily the product of a coronavirus-infested economy in which demand has dropped 20 percent in just a few weeks. As Berman points out, estimated U.S. oil consumption has returned to a level not seen since 1971.