CO2 emissions: The trend is not your friend

When the International Energy Agency (IEA) reported in late March that energy consumption in 2018 rose at the fastest rate in a decade, it confirmed something that most of those who truly understand the climate crisis already know: Collectively, humanity is making almost no progress in doing anything significant about climate change. So, it's not surprising that atmospheric carbon dioxide concentration has hit yet another record high. 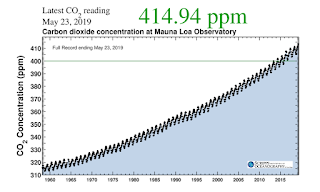 While the dominate public narrative has been that we are making great leaps toward a low-carbon economy through the rapid deployment of renewable energy, the IEA report showed a civilization moving inexorably toward climate catastrophe.

Of the growth in energy demand—the extra energy needed to power the world economy in 2018 versus 2017—70 percent was supplied by fossil fuels. When we hear, as the IEA tells us, that solar energy generation increased by 31 percent last year without appropriate context, we fail to understand that this is off a very small base relative to fossil fuel energy.

Helium is a finite resource—who knew?

Almost precisely 10 years ago I wrote about the likelihood of a shortage of helium in the not-too-distant future in a piece entitled "Let's party 'til the helium's gone." Last week worries about a helium shortage appeared in my news feed. It seems that we are indeed going to party 'til the helium's gone as no steps that I know of have been taken to avert the inevitable shortage.

That the shortage comes as a surprise results from a certain scientific illiteracy about the makeup of the universe and the geology of the planet. More on that later.

It also results from a peculiar type of economic thinking that is pervasive today that states that when shortages occur of any commodity, prices will rise to incentivize exploitation of previously uneconomical resources and automatically solve the problem. This intellectually lazy pronouncement does not consider whether the new supplies will be affordable. (As I pointed out in another piece about helium in 2013, "Things do not have to run out to become unavailable.")

Does Chevron know exactly what shale oil and gas are worth?

Welcome to the bidding war that didn't happen. The decision last week by international oil giant Chevron Corp. to leave its takeover bid for shale oil and gas-heavy Anadarko Petroleum Corp. unaltered in the wake of a higher offer from rival bidder Occidental Petroleum Corp. surprised some who had expected a back and forth escalation between the two competitors.

Chevron's CEO told Bloomberg, "Winning in any environment doesn’t mean winning at any cost." Chevron's hesitancy to pay up for Anadarko's assets suggests a measured assessment about what Anadarko might deliver, one tempered by emerging political developments and perhaps a less sanguine view about the durability of the shale boom.

One day before the presidential election in 2000, president-to-be George W. Bush told an audience in Bentonville, Arkansas that his vanquished primary opponent, Sen. John McCain, had "misunderestimated me."

That malapropism became one of the most famous of his many linguistic missteps. But, it was Bush, or rather his vice president and Ph.D. advisors, who "misunderestimated" the risk involved in going to war with Iraq. The predicted "cakewalk" into Iraq turned into a bloody nightmare occupation lasting more than a decade. The unforeseen consequences of war are very often "misunderestimated."

I began thinking about "misunderestimated" risks this week when I read an article about the U.S. Food and Drug Adminstration slapping a more visible warning on popular sleeping pills. I went through a serious bout of insomnia many years ago. For months I only slept every third night. I understand how desperate people get under such circumstances. But is it wise to take a sleeping pill, the known side effects of which can be driving while asleep and even suicide?