Remembering where we live: Physics vs. biology

It is awe-inspiring to view images of galaxies and nebulas brought to us by high-powered, space-based telescopes. And, it is even more amazing to see depictions of such phenomena as if we, the viewers, are suspended in space a long, long way from Earth. In fact, in modern science fiction movies and television shows we are regularly treated to adventures that take place wholly outside of our solar system and even outside our own galaxy. 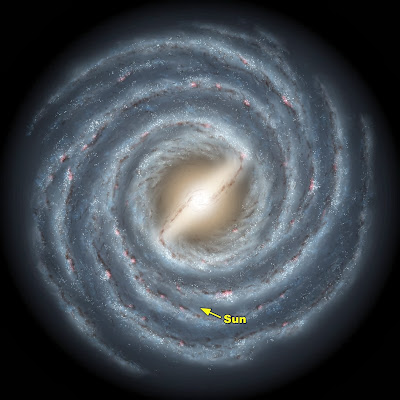 This is the distance the mind can travel using physics. Physics is "the science that deals with matter, energy, motion, and force" according the dictionary. It is the world of "res extensa," literally, "extended things." It presumably operates without respect to humans. If we humans weren't alive, physical laws would still hold in the universe; and, the world of objects, of "res extensa," would still exist. Physics offers a bodiless, infinite view of where we live. According to physics we live in the universe.

In reality, we are biological creatures. Our existence is entirely enmeshed in a web of life and necessary resources that runs from the deepest oil wells to the upper reaches of the atmosphere. If the Earth were an apple, we would live within the equivalent of the skin. Yes, we have on a few occasions sent humans beyond this narrow band of life, but no further than the moon and only for short periods of time. Long-term human presence in space is problematic; we aren't made for it.

And yet, our lives, our outlook, our policies are all geared toward the view that we live in an infinite universe--that we can grow our population and our consumption infinitely. After all, we've got the whole universe to draw from for whatever we need--which accounts for the occasional proposals to mine asteroids and scoop helium off the Moon. (This physics-based mindset is so deeply embedded in our culture that it affects our actions even if we are not fully conscious of it and even if we do not buy into some of the more fantastical claims related to it.)

There is also the dream that we will terraform other planets, that is, transform them from rocky, atmospherically challenged wastelands into Earthlike havens. I am reminded of the opening of the short-lived television series "Firefly" which begins with the narration: "Here's how it is. The Earth got used up. So, we moved out and terraformed a whole new galaxy of Earths."

Which begs the question: If we have or will have such powerful technology, why not just fix the Earth? The answer, of course, is that it is not that simple. We are not the Earth's masters, just one set of its inhabitants with very, very limited knowledge about how it works. That being the case, it is hard to imagine that we could ever figure out how to remake another planet in Earth's image, let alone do it in any time frame that matters to humans.

And so, our home remains in the biosphere including to some extent the hydrosphere and the lithosphere. In relation to the universe, this home is limited, tiny and fragile. All the other rocky planets in our solar system--Mercury, Venus, and Mars--either have had most of their atmosphere ripped away or, in the case of Venus, developed one so thick that it would press down fatally on Earth's large life forms. Atmospheres friendly to advanced life appear to be rare.

Compared to the feeling of limitlessness provided by physics, our biology seems like a prison that keeps us close to the Earth. Science studies scholar Bruno Latour refers to those who accept our biological limits as "earthbound"--as distinct from normal humans who continue to believe that we will one day transcend our biospheric prison and populate the stars. It is the latter view which prevents us from thinking clearly about the limits of our earthbound existence.

Billions of people are not going to rocket off the surface of the Earth anytime soon for a rendezvous with all those planets terraformed in the television series "Firefly." Instead, we are faced with the difficult task of salvaging our existence on this planet through the tedious work of completely reworking modern civilization in order to harmonize it with the limits of the narrow envelope of life we inhabit on Earth.

That work can only succeed if we remember where we actually live.

P.S. I am once again indebted to Bruno Latour who gave the Gifford Lectures last year which inspired this piece and a previous one. And, once again I thank my friend Jim Armstrong for thoroughly stimulating ongoing discussions about these lectures and Latour's latest work.

I agree completely, but still find it hard to give up the yearnings engendered long ago by my years of reading science fiction. Even though our biosphere is the closest thing to heaven that anyone will ever see, the fact that we are indeed "trapped" here is still somehow disappointing.

Hi Kurt,
I agree with the gist of what you have written, but I can't help but feel that physics may have been wrongfully accused in this case (for the record I am not a physicist ;-).

I think an important thing to remember about human beings is that they are [irrational] humans first and [rational] "scientists" only second (this is true for actual scientists too).

For example if, in fact, modern humans are generally ruled by a "physics-based mindset" shouldn't we expect then that such people would naturally be inlcined to embrace physics-based climate science to a much higher degree?

Or what about those scientists that have used their knowledge of physics to provide evidence to help disprove the "infinite" (or at least arbitrarily very, very, very large) expansion meme?

My own guess is that popular notions about colonizing space are the result of the human mind imagining something that it wants, then using tools like a knowledge of physics, attempts to describe how such a fantasy might be possible (ie, the physics comes after the fantasy).
Such descriptions can then lend an apparent credibility that later turns out to be unwarranted - something like the fantasy of flying cars, or the "hoverboards" of "Back to the Future 2" fame - which, incidentally, that movie predicted will be available to consumers next year.

It is physics that can calculate the how absurdly poor the energy returned on energy invested ratio would be for solar system mining.

It is physics, ultimately that allows us to make sense of the biological world, from the climactic to the cellular level. No where is this cooperation between disciplines more important than in climate and ecological sciences.

It was the U.S. Space Program that for the first time in human history, brought us the image of Earth from space, an profoundly affecting image that once and for all demonstrates both the finite nature of our home, and its interconnectedness.

And it will be careful and astute attention to actual physical realities that will enable us as a species to balance our immense curiosity toward the unknown with the sacred love of the heart and the home -- both of which characteristics have served us well throughout our evolutionary journey. Both of which, too, define who it is that we are.

Finally, the issues you grapple with as a writer and a scholar are not necessarily issues of all time. They are, however, the essential issues of OUR time. If we are forever want to dreamily look out into the night sky with visions of flight, let us for now simply put this dream on a longer trajectory.

Successfully mastering ecology, through traditional "appropriate" technologies as well as profound new discoveries in energy physics is the FIRST STEP toward any true exploration of deep space.

Remember that unlike mastery over a slave, mastery of a discipline is a self-mastery requiring that we subordinate ourselves to the disciplines over-arching truths.

As any physicist will agree, there is no better habitat for humanity than this home we have here, the fragile and awe-inspiringly minute Pale Blue Dot scoped by Voyager 1 in 1990.

In order to venture into space, we must first submit ourselves to self-mastery within the limits of the physics of the ecosphere.

Okay everyone, I am not anti-physics. Those of you who read me regularly know that I base much of my work on well-supported science including physics.

I am merely trying to express one way in which we think about ourselves and our place in the universe using selected aspects of physics. Physics and its application to space flight can make us believe that we aren't trapped in the biosphere. Biology explains why we are.

I am not pointing the finger at physics or physicists in general. That's not my point. So, my apologies to all physicists. I am thinking of physics in this case from a literary point of view. Hence my reference to science fiction movies and television shows. How is physics used to tell a story of limitlessness?