It's not exactly clear where the term "snake oil" comes from. But, most everyone knows that it refers to any number of concoctions sold by traveling salesmen in the 19th century and claimed to have miraculous healing powers. Key to the pitch of these salesmen was the shill, a person working with the salesman, but who appeared to be a member of the audience. The shill feigned infirmity or illness and then offered to be treated on the spot with astonishing results.

The snake oil analogy seems apt for the hype surrounding the future supply of oil and natural gas extracted using the technique called hydraulic fracturing or fracking, for short. In his new book Snake Oil: How Fracking's False Promise of Plenty Imperils Our Future, Richard Heinberg takes on overblown claims from both the oil and gas industry's salesmen--its top executives, industry trade groups and PR firms--and its shills--fake think tanks, paid consultants, and captive analysts who are often quoted and interviewed (mistakenly) as independent experts. 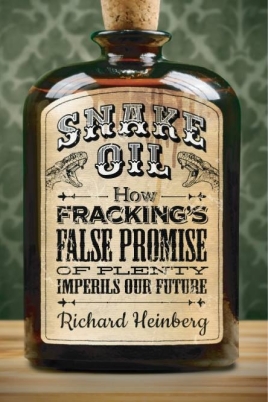 Here in one volume laypersons seeking to make sense of the fracking story can find clear guidance. Heinberg separates the hype from the facts, demonstrating that fracking is not a panacea for the world's energy needs. Rather, it is the last short-lived gasp of the fossil fuel age as the industry seeks out ever more expensive and difficult-to-extract oil and natural gas deposits in order to forestall an inevitable decline--a decline which must be addressed decades in advance if we are to make a successful transition to an alternative energy economy.

How does Heinberg know all this? He knows this by looking at the data which he explains in a way that those who are not experts can readily absorb. Naturally, the industry assiduously avoids talking about the actual data from its own fracked oil and natural gas fields for that data bodes ill for the industry's future.

Heinberg takes pains to point out the industry's successes and its ingenuity in figuring out how to get oil and natural gas out of previously inaccessible deposits. But, the problems are fourfold. First, it's very expensive to do this. The industry's promise of cheap oil and natural gas for decades to come is an impossibility based on its own cost numbers.

Second, production from new wells runs down very quickly; some 30 to 50 percent of fracked natural gas must be replaced EACH YEAR before supplies can grow. The decline in the rate of production for fracked oil is up to 60 percent in the first year for new wells in the Eagle Ford deposit in Texas. I've seen an estimate of 42 percent PER YEAR for all wells there, new and old; but, that's still a wicked number. I've likened the situation to trying to run up a down escalator while the downward speed is increasing.

Third, as the industry drills these new deposits, government agencies and independent researchers are reducing dramatically their estimates of what the industry will ultimately produce. Information from actual wells tells them that these deposits are turning out to be like conventional oil fields with sweet spots in a few places and vast areas that will never yield profitable hydrocarbons.

Fourth, the environmental costs such as polluted and depleted water; contaminated soil; poisoned air; and induced earthquakes are growing with each drill bit that pierces the ground. In fairness, the industry is learning how to reduce these problems as it gets more experience with fracking. But the sheer scale of the drilling is likely to offset better practices as tens of thousands of new wells spread across the landscape to make up for the previously mentioned huge yearly production declines in existing wells.

A boom that was forecast by the industry to last for decades or even a century is therefore likely to end before this decade is out, Heinberg concludes. We ought be taking some of the energy from this newfound oil and natural gas, he says, and use it to build the renewable energy economy that we will surely need in the decades to come.

This is the heart of Heinberg's message. While other nations have long since accepted the need to move away from fossil fuels--both because they are finite and because they are major contributors to climate change--the United States is being lulled into a false sense of energy security. In the bargain the country is also increasingly ignoring the ravages of climate change that are becoming more apparent with each passing day.

The oil and gas industry knows that the promise of cheap, abundant energy is like a siren song to the American public. That's why the industry keeps pounding away in the media with its cornucopian message. But, like a siren song, that message, if not resisted, will lead to the equivalent of a shipwreck on an energy-starved island called the future.