Not so much: Shale gas shows its limitations

If you live in the United States and bother to turn on your television, it's almost impossible to avoid ads telling you that natural gas from shale is both abundant and environmentally safe to develop. In these ads, so many happy people seem to enjoy burning natural gas that it would be difficult to imagine that their smiles might come to a premature end.

Though the ads will probably not be withdrawn or recut, the emerging facts run counter to the gleeful tone of this television commercial produced by America's Natural Gas Alliance, a consortium of shale gas drillers. (For some more samples from other advertisers, click here, here and here.) First, it has become increasingly apparent from actual well data that shale gas is not being harvested according to the much-touted "manufacturing model." This model assumes that shale deposits are basically uniform, or at least uniform enough that a driller could sink a well virtually anywhere in a shale gas deposit and have an economical well blasting out methane.

Independent petroleum geologist Art Berman and his colleague Lynn Pittinger, who studied the actual data, have shown that the manufacturing model is a myth, to wit: "The contraction of extensive geographic play regions into relatively small core areas greatly reduces the commercially recoverable reserves of the plays that we have studied." In short, you can't just drill anywhere. Drillers thought the huge plays highlighted in pink on the map below would yield profitable shale gas everywhere. It turns out that there are sweet spots, and then there are spots that are not sweet at all. And, the sweet spots are turning out to be quite small compared to the size of the deposits. 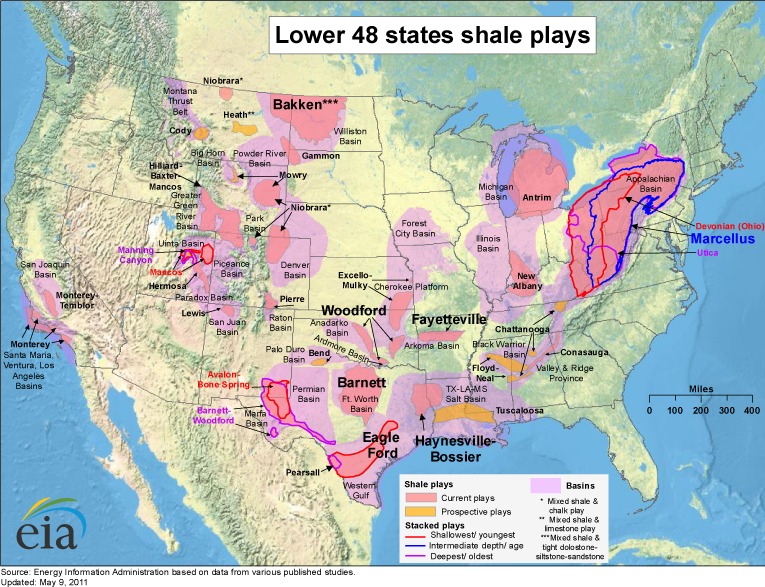 Berman and Pittinger also point out that initial high flow rates give out within a couple of years, putting drillers on a treadmill merely to replace this declining production and implying geometric increases in the number of wells they must drill to grow production consistently. What's more, the two authors question claims of decades-long flows, albeit at very low rates, from individual wells. The history of shale gas wells to date suggests that this is unlikely at best, and almost certainly uneconomical.

The second shoe to drop was a piece in The New York Times entitled "Insiders Sound an Alarm Amid a Natural Gas Rush" which cited internal memos and emails from industry and government officials admitting that estimates of the available gas from shale are overblown.

The third piece of damning news came from a recent U.S. Geological Survey (USGS) assessment of the Marcellus Shale natural gas deposits, by far the largest of their kind in the United States spanning vast areas of New York, Pennsylvania, and West Virginia as well as sections of Ohio, Kentucky and Tennessee. Previously, the U.S. Energy Information Administration, the statistical arm of the U.S. Department of Energy, had estimated that the Marcellus Shale contained 410 trillion cubic feet of so-called "technically recoverable shale gas resources." (This says nothing about whether such resources can be economically recovered. See the discussion of natural gas prices below.) The USGS report put the technically recoverable amount at 84 trillion cubic feet, an 80 percent reduction. For reference, the United States consumed about 24 trillion cubic feet of natural gas in 2010.

The often repeated claim that the United States has 100 years of natural gas at current rates of consumption is based to a considerable degree on the 410 trillion cubic feet which the Marcellus Shale supposedly added to U.S. resources. But, don't expect the shale gas drillers to stop advertising the 100 year claim anytime soon.

The fourth piece of news came not from industry insiders or studies of Mother Nature herself, but from state government. As I wrote earlier this year, new regulations could significantly dampen shale gas production. The newly released regulations in New York state do just that and to a degree that even I didn't think possible. Buffers are now required around water resources and have cut down the area available for drilling within existing shale gas leases by 40 and 60 percent. In addition, some municipalities are using their land use regulatory powers to make it all but impossible to drill in their jurisdictions.

As a result drillers are furious, so furious that some are thinking of abandoning their leases to concentrate on drilling in states with more lax regulations. New York may bid them a fond farewell since the legacy costs of cleaning up aquifers and drinking water could in the long run far outweigh the temporary economic gains from natural gas production.

Finally, there is always the question of price. A drilling foreman I know told me not too long ago that we might have quite a bit of natural gas available above $10 per thousand cubic feet, but not very much below $4. Price matters because the huge amount of natural gas promised by the industry would require the exploitation of deposits that are expensive to develop and therefore require prices much higher than today's.

I expect there to be a fifth, sixth and seventh piece of news and so on, detailing new limits on the rate of shale gas extraction. True, the explosive growth of shale gas production certainly caught many energy analysts by surprise. The received wisdom up until recently was that conventional gas production would decline, and the United States would increasingly rely on imports. But, I think the public and policymakers, who are being propagandized daily by the industry, may be in for yet another surprise.

Abundant natural gas? Sort of, but only if the price is right. Cheap natural gas for the long run? Not so much.

It would seem that the Rule of 72 could be applied here, to any quantity, not just money. Using the rule of 72, a 2% rise in consumption year over year would mean a 100 year supply would become a 36 year supply, and if you increase consumption 5%, well, then you're looking at about 14 years or so.

Now, if we were to somehow find a way to move half our fleet of motor vehicles off gas & diesel oil to gas, and if we also build more gas-powered power plants instead of coal or gas, and we also increase our use of electricity.. how long does that "100 year supply" last.

As John Michael Greer put it, we're singing lullabies to ourselves. And the fossil fuel producers, who surely know better, are lulling us into using the last of our private money and public capital into lining their back pockets because they know that they are in a sunset industry and they have only so much time to make hay. They're definitely not in it for the long haul anymore, but we will be stuck with the consequences of our short-sightedness and delusional thinking forever.

..and, opening a cupboard full of fruits and vegetables, finding our favorite sugary cereal box is empty, we must submit to hunger and eventual starvation?
http://thearchdruidreport.blogspot.com/2011/10/trouble-with-binary-thinking.html
"...preying upon and capitalizing on people's fears." is in large one of the most important tools of public relations and marketing (pleasant titles for expanded forms of simple propaganda) that have helped to create such very interesting minds that broadcast themselves so emphatically from industrial societies.